Last monday (February 8, 2010) Sebastiaan Visser and I presented our ongoing work on the AwesomePrelude at the Dutch Haskell User Group meeting.

The AwesomePrelude is reimplementation of the Haskell prelude in which all data types have been replaced with type classes. Embedded Domain Specific Languages (DSLs) can implement these type classes to get access to the functions defined in terms of the type classes. For example: by implementing the BoolC type class, a DSL gets to use the (&&), (||) and not functions.

Here’s a recording of our presentation:

The slides are online, and the code is available on github.
The reactive javascript example Sebastiaan mentions in the talk doesn’t use the AwesomePrelude per se, but is based on the same ideas. 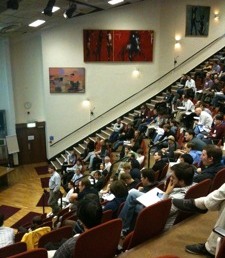