I wrote a Swift library to help with prototyping (haven’t used it yet in production apps).

CloudStorage is property wrapper that will save values in iCloud key-value storage. These values are persisted across app restarts and will sync between different devices that are signed into the same iCloud account. This property wrapper is similar to AppStorage and SceneStorage, two new types Apple introduced with iOS 14.

The basic API is the same as for AppStorage; add @CloudStorage("someName") in front of a property, to save the value to iCloud key-value storage.

Make sure you enable the “key-value storage” service in the iCloud capability. See Apple’s documenation.

See also the example app in the repository.

For what should this be used?

The same caveats apply as with key-value storage itself:

From Apple’s documentation on choosing the proper iCloud Storage API.

In general, key-value storage is not meant as a general purpose syncing service. If you need any advanced capabilities to prevent data loss, consider using CloudKit instead.

Check out the CloudStorage repository.

A recording from my talk at CocoaHeadsNL last week:

Tom Lokhorst talks about parsing JSON in Swift. Why is this such a problem? What libraries are there to solve this problem? And how he created a code generator to deal with JSON once and for all. 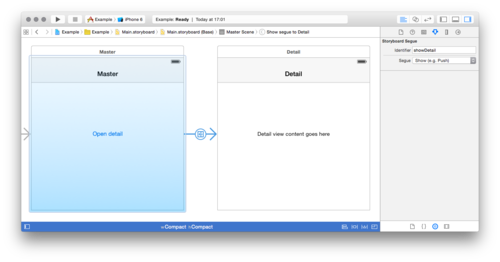 Last monday (February 8, 2010) Sebastiaan Visser and I presented our ongoing work on the AwesomePrelude at the Dutch Haskell User Group meeting.

The AwesomePrelude is reimplementation of the Haskell prelude in which all data types have been replaced with type classes. Embedded Domain Specific Languages (DSLs) can implement these type classes to get access to the functions defined in terms of the type classes. For example: by implementing the BoolC type class, a DSL gets to use the (&&), (||) and not functions.

Here’s a recording of our presentation:

The slides are online, and the code is available on github.
The reactive javascript example Sebastiaan mentions in the talk doesn’t use the AwesomePrelude per se, but is based on the same ideas.

Computers are really nice machines, they have amazing processing power and can be used for all sorts of noble purposes, such as storing your family photos.

Unfortunately, they also have the downside of generating heat and noise, so that’s why I keep one of mine at a friend’s house (also because he has a very fast internet connection). Strangely though, it seems he also isn’t to fond of all that heat and noise and turns the machine off when he thinks I’m not using it. So that’s why I needed a way to send a Wake on LAN signal, known as a magic packet, to remotely start the machine.

Yesterday I wrote a small Haskell program called wol (available on Hackage) to send the “magic packet” to his router. We had to flash his router with new firmware to be able to have it memorize the internal ip address/mac address/port combination, but now it’s working!

I must say, it took me an embarrassing amount of time to write this program. For some time, I was stuck on why the socket wasn’t working. Then I found out I shouldn’t use the PortNum constructor to construct PortNumbers, because the endianess doesn’t match on my machine. It turns out your supposed to use the Num instance of PortNumber and use functions like fromIntegral. I’m happy to see other people also noticed how annoying this is, and are discussing a revamped network package.

Anyway, now you can all start starting your machine remotely with wol (which, to be honest, is just a Haskell port of some PHP script I found online…). 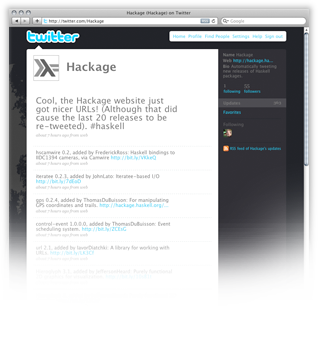 The Haskell community is very active. New packages are released to the central Hackage server each day.

But be warned! There’s a lot happening, in the 3 days Hackage has been online, it has already tweeted more than 70 new releases.

The Twitter account is running a tool called hackage2twitter, build on top of the feed2twitter library for tweeting posts from a RSS or Atom feed.

If you want to pipe your own feed to Twitter, you can use the feed2twitter library or executable.

Ever found yourself in need of a if-then-else replacement that can be partially applied? Something you can pass to higher order functions? In short, ever needed this function?

Well, I did. So I’m very happy to announce my first public Haskell library: bool-extras!